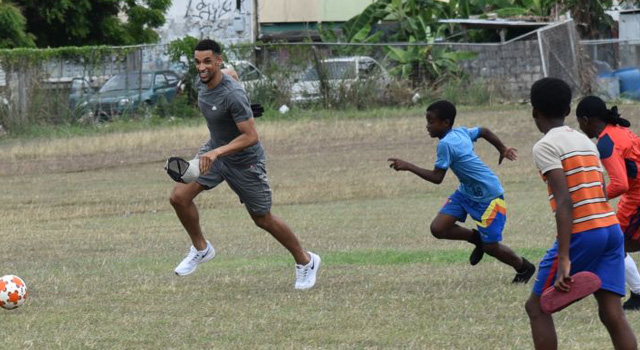 THE BREWSTER TRUST and the Jason Roberts Foundation Grenada have facilitated “NicksKitCollection” in Barbados.

Derby County striker Nick Blackman has handed over hundreds of football shirts, donated by fans from all over the world, to young people at the Pinelands Youth Soccer Academy in Barbados.

The academy sits at the centre of one of the poorest communities in Barbados where football has played a key role in addressing violence between rival gangs.

The shirts were gathered as part of #NicksKitCollection, an initiative that encouraged fans and players of all clubs to donate their old shirts to those less fortunate overseas. The idea was the brainchild of Blackman and forward thinking supporter group, the Punjabi Rams, who came together to deliver the initiative.

The collaboration saw more than 400 shirts donated, as well as other equipment, with fans from across the globe getting involved. Players including Derby and Ireland captain Richard Keogh, Manchester City midfielder Yaya Touré and Chelsea’s Nathaniel Chalobah all donated their shirts in support.

Blackman – who has family in Barbados and has been helping communities on the island for a number of years – chose to give his share of the shirts to the Pinelands Youth Soccer Academy and was delighted to personally hand them over.

Nick Blackman, said: “It was an incredible feeling to give the guys at Pinelands Youth Soccer Academy the shirts from #NicksKitCollection. They are based in an area of Barbados that really needs support and where football has played a big part in bringing young people together for a more harmonious community. The way the fans at Derby County got behind the collection has been brilliant and the club have been very supportive. I was also touched by how many supporters of other clubs donated shirts – particularly those based overseas. People outside of the island often think of Barbados purely as a holiday destination, but the reality is quite different. Communities here need help – and as someone with roots in the country I am proud to do my bit.”

Ms Nicole Smith, from Pinelands Youth Soccer Academy, added: “We are delighted to receive the shirts from #NicksKitCollection and would like to thank Nick and also all the football fans that kindly donated. Our community will benefit hugely from the donation. Many of the young people we work with come from families that really need support. And one thing we can guarantee is that Derby will now have a much larger following in our community!”

There are no comments yet, add one below.