Further information about the School Programme 2013

THE BREWSTER TRUST offered the Barbados Secondary Schools’ Football League (BSSFL) its support to implement on their new initiative, the “Development Programme”, to improve the overall standard of football in the secondary schools of Barbados with the main goals:

After the Ministry of Education and Human Resource approved the new School Programme format 29 secondary schools and institutions have been contacted in December 2012, informed about the programme and offer and have got the opportunity to register.

The offer to the Secondary Schools in Barbados

THE BREWSTER TRUST and the BSSFL defined three elements to start the co-operation for the benefit of attending schools:

A coaching course for the secondary schools’ football coaches, PE teachers or other people in school involved in football has been scheduled for Monday, 21st January 2013 to Wednesday, 23rd January 2013, daily 9.00 am to 5.00 pm, venue is the Samuel Jackman Prescod Polytechnic; head coach was John Olaleye of Arsenal FC, the course was free of cost.

The schools had to register their participant(s) and 51 school coaches from 24 secondary schools registered.

During the three days the following elements have been on the agenda for the sessions on the field:

During an off-the-field session some insights with regards to health, nutrition,  tactics, motivation, team building, respect or fair play had been shared and discussed. All registered coaches have been invited for lunch by the BSSFL.

THE BREWSTER TRUST plans to offer support with regards to equipment on a sponsorship basis but with some simple conditions of usage for every participating school and/or school team (boys or girls). The registered charity is in contact with other partners to raise the needed funds for a specific package that includes for example individual and branded tricots with shirt, shorts, socks and shin pads for 20 players and 2 goalkeepers including 2 pairs of goalkeeping gloves, a set of bibs, footballs, foldable mini goals or a set of markers.

THE BREWSTER TRUST offers weekly coaching courses at the individual schools, held by coaches from Arsenal FC / Arsenal in the Community and free of cost. The schools could choose from the following options:

Option A: Curriculum Sessions: After a pilot programme in 2012 the Ministry of Education and Human Resource agreed that this kind of programme can be part of the Curriculum. Every week a coaching team comes to the school for a morning or afternoon programme with students, classes, forms or individuals the school select; the maximum of group is 25 students.

Option B: Double Club: The Double Club sessions are like the Curriculum Sessions with the difference that the first half of the programme is held in the classroom with specific workbooks combining academics and football with the main focus on general literacy; the maximum of group is 25 students.

Option C: After school programme: Every week a coaching team comes to the school for an after school session open to students; the maximum of group is 50 students. 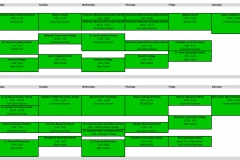 Implementation & statistics of the programme 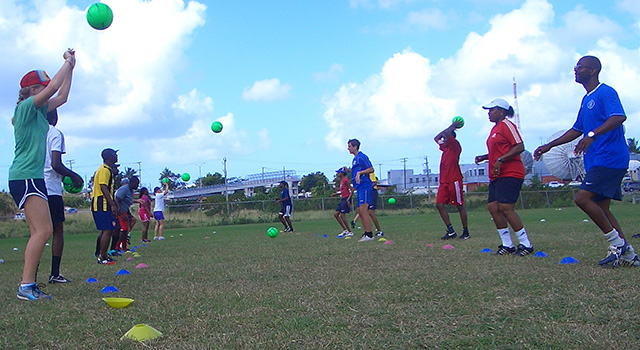 On Monday, 21st January 2013 the “School Programme 2013″ kicked off with a coaching course for the Secondary Schools’ coaches with in total 51 registered participants from 24 schools. The course was held by John Olaleye of Arsenal FC at the Samuel Jackman Prescod Polytechnic. During the three days the following elements had been on the agenda for the sessions on the field:

During an off-the-field session some insights with regards to health, nutrition,  tactics, motivation, team building, respect or fair play had been shared and discussed. All registered coaches had been invited for lunch by the BSSFL. The on and off-the-field sessions have been summarised in a documentation with 61 pages that has been given to the coaches at the end of the course. THE BREWSTER TRUST thanks the participants for their engagement and passion, well done. A big thank you also to Samuel Jackman Prescod Polytechnic, we were allowed to use their facilities over three full days, a generous gesture. A final thank you to John Olaleye of Arsenal FC who travelled to Barbados to conduct the course – entertaining, pulsating and diversified – we hope to see you back again soon. 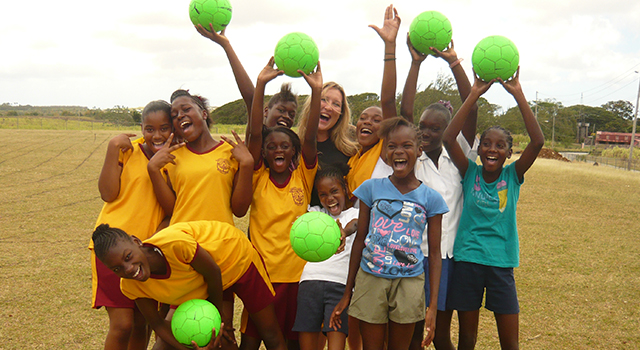 After the coaching course for the Secondary Schools’ coaches with in total 51 registered participants from 24 secondary schools at the Samuel Jackman Prescod Polytechnic in January 2013 the weekly coaching courses at individual secondary schools started. The schools had the choices “Curriculum Sessions”, Double Club which includes an academic part combining general literacy and football, after school programme or a community session on Saturday mornings. 22 Secondary Schools registered for the weekly sessions till the end of the actual academic year – in numbers: 36 sessions or over 62 hours of football weekly, provided by the Arsenal coaches Dana Podmolikova, Niall Conwell, Cedric Johnson and Jamie Hunter.

The registered charity scheduled for the eleven weeks from january to April 406 football sessions, 5’665 students took part including nearly 40% girls. The programme continues after the Easter holiday break.